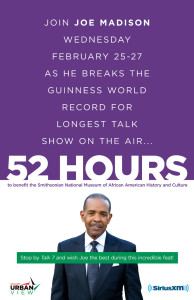 “Queen of Soul” Aretha Franklin; actor, director and political activist Danny Glover;  sports journalist and host Stephen A. Smith; actor / comedian Wayne Brady;  and Marketing Pulpit’s own Robert Gatewood  were among the guests making history on the Joe Madison Show as he enters the Guinness Book of World Records for the longest talk show on the air.

Gatewood joined Madison in the SiriusXM studio on Wed. Feb 25th, 8:00 pm where he discussed the “Marketing Metrics”.

Gatewood has been a frequent guest on the show, including the week before Pres. Obama’s inauguration, during which he discussed his Amazon Best-Selling book, “Played in Full: The Marketing Expoitation of Black America.”

Madison, who is a client of Gatewood, will be raising funds for the Smithsonian National Museum of African American History and Culture which is currently under construction on the National Mall in Washington, D.C. The museum is scheduled to open in 2016. ‘
You too can make history and become a charter member by donating!