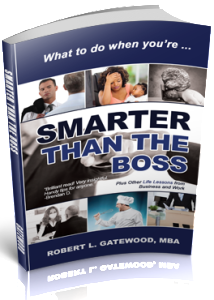 Marketing Pulpit’s Robert Gatewood has just released a new book. “Smarter than the Boss,” a 2nd for Gatewood, is a compilation of essays for employers, employees and the self-employed.

The title created such a firestorm of interest that Gatewood was approached to be a contributor to “The Business Gazette of Australia.” Gatewood  was also feature in the World News of Northern Ireland.

According to Gatewood, “I understand that the book is controversial, so when I ordered the first batch of books, I also ordered some brown bags to go along with it.”

According to Gatewood, “I understand that the book is controversial, so when I ordered the first batch of books, I also ordered some brown bags to go along with it.” He adds, “The book is certain to make some bosses a little uncomfortable, so much so that it might not be a good idea for employees to leave the book lying around the office uncovered.”

Even though the book has a controversial title, it covers a variety of topics encountered by workers and employers on a daily basis, including, “What If You Had to Live On Half Your Salary.” It also includes, “8 Signs You’re About to Be Fired.” The book adds a business context to the controversial ending to Superbowl Super Bowl XLIX in an article titled, “The Biggest Risk is Not Taking Risks.”

If you or someone you know is struggling at work or at home, and could use some solid information and proven inspiration, then this book is chock-full-of-essays that touch on practically every subject.

The book can be purchased, on the Marketing Pulpit website for only $9.95 or by visiting www.smarterthantheboss.com.

Visit Amazon.com to see complete list of books by Gatewood!