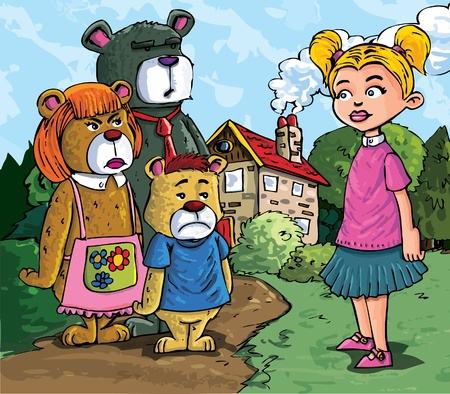 Over the years, I’ve encountered some habits that are surefire success killers.

One of those compulsions is to miss a deadline due to a utopian quest for perfection. Instead of taking the most exiguous route to the goal line, some perfectionists pile on layers of unnecessary activities; inject gratuitous alternatives; and create such chaos that others are unable to differentiate between the means and the end.

This reminds me of the mythical character Goldilocks who one day, in order to cure her hunger, forced her way into the vacant home of a family of 3 bears. Speaking of the number “3” what is it about this notorious integer that draws fairy tale authors to it like moths to a flame, i.e., 3 bears, 3 pigs, 3 blind mice? And while on the topic of fairy tale hallmarks, why the incessant violence and brutality. This orgy of nightmare-inducing gore includes wolves eating pigs; farmers’ wives mutilating blind mice; lumberjacks beheading anything in their wake; bears eating little girls; and other instances of sadism. It’s enough to make one wonder how any of us can sleep nights.

Let’s get back to the story. There’s an unspoken concept that nobody starves to death in a land of plenty, so breaking and entering to avert certain starvation might be forgivable under certain circumstances. Perhaps after Goldilocks filled her stomach she could have repaid the bears by waxing the flows, chopping the wood or leaving a promissory note, but Goldilocks had a peculiar habit of engaging in the bizarre.

Rather than confiscating the porridge and vacating the premises, she decides to become Simon Cowell and performs an American Idol-like taste test on the three bowls of soup. It was difficult to tell whether she was hungry or if she was looking for the next Julia Child. Consequently, after her tasting binge, she needed a rest, but rather than absconding, she decides to take a nap in the same home she had unlawfully entered.

Naturally the bears, upon their return, were none too thrilled to find that someone had devoured the baby’s porridge and broken his chair. I wouldn’t want to marginalize the horror of a young girl being eaten by bears, but Goldilocks contributed to her own demise, or simply put, she brought it on herself. Had she engaged in less perfectionism and kept her eyes on the goal, it’s quite possible she could have accomplished her mission and skipped off into the sunset, barring there were no wolves or lumberjacks along the way.

There are varying versions on how this story concluded. In the original version the petulant bruins had Goldilocks for dinner. Unfortunately for her, the bears weren’t particularly forgiving and she played the role of entree. In 3 other versions the bears engaged in a bit of torture as they throw her into the fireplace, drown her in a well, and impale her on a church steeple. In a more recent, kinder-gentler version, Goldilocks awakes from her siesta, screams at the sight of the bears, jumps out of a window, and is never to be seen again.

There is one other ending that never made it into fairy tale lore. In this version Goldilocks was last seen trolling the job websites, looking for a new environment in which to ply her perfectionist trade. In this version, she also has the ability to morph into any gender, race, age, position or profession.

I suspect that the home of the bears was not Goldilocks’ first caper, nor would it be her last. Who knows where Goldilocks will resurface next? Goldilocks could be our next client, our next employee, our next boss, our next contractor or, a little closer to home, she could be our reflection in the mirror.

We can’t have a fairy tale without a moral of the story, and this one pertains to workforce and business development.

5 Bits of Advice for Perfectionists

Perfectionism is often fueled by an irrational fear that others can do the job better, or that we will be judged harshly by others.

By building our self-esteem and staying at the top or our game we are better equipped to avoid the “Goldilocks Perfectionist Syndrome.” By so doing, we can concentrate on the finish line and reap the limitless possibilities by completing the job on time.