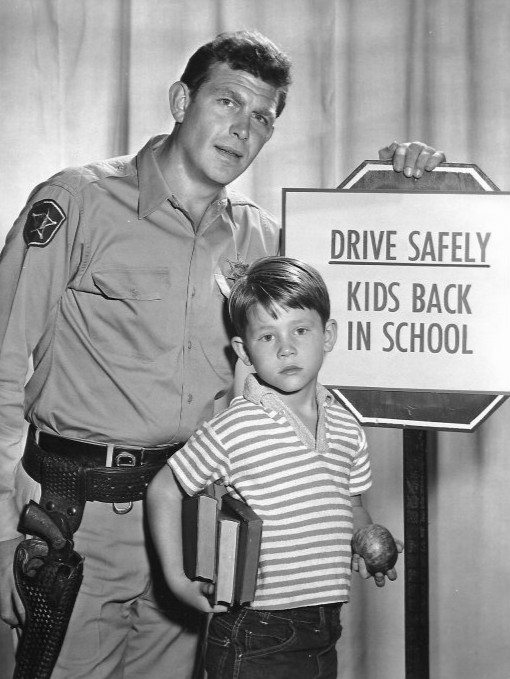 Over the July 4th holiday, in the midst of my freedom-reflecting, somehow I found myself in the midst of an Andy Griffith Show marathon. One great episode led me anxiously into the next. I was totally mesmerized. It’s amazing what one does with idle time on his hand.

That little Opie was quite a character. He was the poster boy for childhood innocence. Andy Griffith was the dad that every kid wanted; honest, understanding, patient and kind. He reminded me of my own father.

This show was no ordinary show. It touched on some of the pressing issues of the day, bullying, family values, single parenthood, alcohol abuse and a host of other complexities that strike at the core of American society.

The show ended its final season at number one according to Nielson, and it has been ranked by TV Guide as the 9th-best show in American television history.

The show featured the affable Sheriff Andy Taylor and his inquisitive son Opie. Andy was like an artist, exerting his precocious young son as fresh canvass as he illustrated his rendition of right and wrong. Andy was a compelling artist. When he painted the picture, you got it.

The effectiveness of the Andy Griffith Show was enhanced by its injection of an innocent youngster as one of the central characters, providing the viewer an opportunity to see society’s value systems as a dynamic entity equipped with a forgiving reset button.

With such an iconic standing and a previously unseen ability to shape the psyche of America at its disposal, I wonder why the show avoided the rampant racism that was wreaking havoc on the little black “Opies” and their families during that era.

The show was televised from 1960 to 1968, during some of the most turbulent years for race relations in the country’s history. During that period, Malcolm X was assassinated, Dr. Martin Luther King delivered his prolific “I have a Dream Speech”; the historic Civil Rights Act was enacted; and in a bit of irony, the show’s final episode was broadcast on April 1, the very week that Dr. Martin Luther King was assassinated. It was as if the show’s ending was the culmination of an 8-year April`s fool joke after which the prankster forgot to yell “April Fool” at the end of the stunt.

I wonder what was going through the minds of the production teams of Ruben and Ross. I wonder if they were they oblivious to the literal and figurative fire storms that were raging around them. Were they not mindful of the terrorist bombing of the 16th Street Baptist Church in 1963 in which 4 innocent black Sunday school girls died? Did they not hear about “Bloody Sunday” in 1965 during which peaceful marchers were viciously attacked by state and local police with billy clubs and tear gas?

Some will say that Andy Griffith was just a television show, and that it was not the responsibility of the show to right societal wrongs. Normally I would agree with such an argument, but this was no ordinary show. I remember an episode in which Andy and his side-kick, Deputy Barney Fife, in their own demonstrative way, taught Opie to stand up to the neighborhood bully. During another episode, Andy taught little Opie the value of hard work, and not to be overly enamored by material possessions. An overriding theme of the show was respect for the law and respect for the rights of others.

I sat through episode after episode waiting to see little Opie run into the jail where sheriff Andy sat behind his desk like Zeus on Mount Olympus, awaiting an opportunity to dispense his wisdom vicariously onto America’s conscience via the circuitous route of his curious son. I waited to hear little Opie go, “Paw, the other kids are treating that new colored kid really badly. When I tried to speak up for him, the other kids stopped playing with me. What should I do Paw?’ Then I would hear Andy reply, “Well Ope, sometimes you have to do what’s right even when it’s not popular. Why don’t you ask that new boy to bring his folks over tonight for some of Aunt Bee’s apple pie. There’s not a problem in the world that Aunt Bee’s pie can’t solve.”

I was literally aching for the episode in which the little black kid would enroll in Mayberry Elementary. I didn’t expect the producers to depict the real possibility of adults spitting on the child and yelling obscenities at him as he crossed the threshold of the school; however, it would have been very consistent with the format of the show to portray the other kids ostracizing the new kid, and then in Andy-Griffith-Show-fashion, we’d see little Opie, under the Andy’s guidance, welcome and comfort the kid, thus evoking tears from the audience as Opie and the new kid walk off into the sunset arm-in-arm.

I’ll admit that I didn’t watch all 249 episodes. So it is quite possible that I missed the episode in which the black kid won the favor of the neighborhood boys by rescuing one of them from a well. It’s plausible that I dozed off during the episode during which the black kid was hit by a car as he was being chased from the basketball court by the neighborhood kids, and then in classic tear-jerking Mayberry-fashion the kids all came to visit him in the hospital and brought him their basketball adorned with all of their signatures. I had my box of tissues at the ready, but it slowly dawned on me that my beloved Andy Griffith Show was culpable in the act of omission.

Quite a bit has happened since the Andy Griffith show concluded. Most of the characters have passed away; however, one pivotal character is alive and well. The venerated little Opie has evolved into quintessential film director and producer, Ron Howard. It’s just another one of the many ironies surrounding the show.

Even though I myself was only 12 at the time, I could very much relate to what was going on, and I was very much aware of the issue race. When I was 13, I started my first business, a shoeshine stand, and it was because of the issue of race that I abandoned that same business just months later.

The summer I started my business, segregation was the order of day. My only interaction with whites was with the owner of the barbershop where my shoeshine stand was located. I would also cross paths into this little red-headed boy named “Steve.” He was my age; he was the barber’s son; he was very Opie-like in appearance, and much to my chagrin, he, like his dad, called me “Shine.”

I figured of all the names a black kid could be called back then, “Shine” wasn’t the worst of them. But I had a name. I knew his name was “Steve,” and that if he ever paused long enough to speak to me, I would have addressed him by his name. Maybe he didn’t know my name. Maybe his dad never had that Andy-Opie talk with him. Perhaps no one ever told him it was impolite to refer to me by a moniker, without my permission, instead of calling me by my real name. For whatever reason, to both of them, father and son alike, I was simply “Shine.”

As luck would have it, integration occurred that fall, and in another of life’s ironies, Steve was now not just the Opie-looking barber’s son, he was a classmate. When our eyes first connected, we were both among our respective friends. We smiled and he greeted me. Unfortunately he didn’t greet me by my name; he yelled out “Hey Shine!” I was totally humiliated, so much so that I abandoned my shoe shine stand. I never went back. I felt like I had been on the receiving end of a calamitous Andy-Opie alter ego.

Back then, race touched us all. So I am quite certain that, like Steve, Opie, a.k.a. Ron Howard, had his bouts with race as well. Race is so often at the core of so many good things that go awry. The best catalyst for race-laced circumstances is the do the right thing. Even if things still go awry, you will at least have peace of mind. The Andy Griffith show was uniquely qualified to deliver a message of reconciliation to a restless nation on the brink of a racial meltdown.

Sometime I wonder about technical behemoths like Facebook, Google and their ilk. When I read the recently released reports about the demographic makeup of their staffs, I wonder if the people in their HR departments are oblivious to the vast windows of opportunities before them. I wonder if they are aware of the virtual storms of omission raging around them. I wonder if there is anyone among them who is old enough to remember Andy, Opie or the tumultuous period between 1960 and 1968. I wonder if they realize that, like the Andy Griffith show, they too are uniquely qualified to deliver a message of inclusion to an agitated nation that has become increasingly polarized.

In the land of plenty, we are constantly presented with windows of opportunity to do what’s right. Doing what’s right is not always popular. At the minimum it gets you ostracized, labeled a trouble-maker, branded an upsetter of the apple cart. At worst it can get you killed. But sometimes the window of opportunity to change society for the better is so rare and so wide that there is no risk too great, no chasm too wide, or no cost too high not to give it a go.

Dr. King put it this way. “Never, never be afraid to do what’s right, especially if the well-being of a person or animal is at stake. Society’s punishments are small compared to the wounds we inflict on our soul when we look the other way.”

Who is looking the other way today? Who is culpable in the act of omission